Thank goodness Jen got us back on track with last few posts. We're going to keep them coming, because Jack is in such a great phase right now: the word explosion, the tireless running around, the obsession with cars, trucks and buses. It's all so much fun.
On Sunday, Josh and Jenn brought Austin over and we all walked down to a restaurant in Del Ray called Fireflies. They have a regular calendar of small bands that play in the restaurant and a standing Sunday Brunch featuring bluegrass music.  Turns out, Jack inherited his mother's "hillbilly" roots-- and loved the Big Hillbilly Bluegrass band. Enjoy the video:
Posted by mjb at 8:54 PM No comments:

After a laid-back start to talking, Jack has moved on to using two-word phrases this week.  His first was uttered at the playground.  Jack was standing near the fence watching the cars and buses and garbage trucks go by (as usual) when Kamala asked him if he wanted to go play with Sonja. To which Jack responded: "No way!"
Since then he has said "turn page" and "the end" while reading.  We taught him to say "again" (instead of whining) when he wants to read a book again, to which we usually say okay.  He now will bring us a book and say: "Again? Okay!"
He also said "upstairs" and "brush teeth" tonight when heading up to bed - and "all done" when he was finished.  Some of his words and phrases are really clear like "no way," but some are best understood by his parents for now.
In other news: Jack also developed new attachments this week.  He now takes naps and goes to bed with his stuffed kitty, which was the first gift I bought for him when I was pregnant. He really had no use for it until this week though!  He now usually carries one or more Hotwheels around with him most of the day.  But his biggest crush is on... Sonja!
For a long time, I've asked Jack, "Who did you dream about?" when he wakes up.  He's not had an answer for me before so I usually start down the list of his daily interactions, "Did you dream about Mommy? Daddy? Kamala?  Sonja?"  Every day this week, when I've asked the question, Jack immediately says, "Son," his name for Sonja!  Kamala also reports that Jack landed a kiss on Sonja this week too.  They always fall for the "girl next door."
Posted by mjb at 8:24 PM No comments:


Last weekend, we traveled down to Sarasota for Michael's cousin's wedding reception. We missed the main event in Antigua, but Rusty and Courtney's parents threw a great party to celebrate the happy couple.  This was Jack's first time meeting the Florida Tatone clan too. Jack had a lot of fun running around at the party - and dancing to Uncle Steve's rendition of some Neil Diamond classics.  Check out this video:
Jack also went to the beach for the first time on this trip.  He loved it!  We hadn't expected to actually go into the water.  The temperature was in the 70s but the water was still cold.  That didn't stop Jack.  He ran right into the water with his clothes on!  We couldn't keep him out - check out this video too:
Jack loved the sand as much as the water.  We are definitely going to plan a beach trip for this summer.  Here are some more pics from a great weekend:
Posted by mjb at 8:58 PM No comments:

We've got some new pictures to post from our mini-vacation to Florida this past weekend, but we are still overdue on holiday posts.  As our loyal readers already know, Jack made his second annual trip to Ohio for Christmas.
He was a better traveler than last year, but that's not saying much!  We've got friends who also made long treks for the holidays, but when we tried to share tales of travel woes with them, they told us that their kids slept half the way there.  That is not how Jack rolls.  We did buy a DVD player this year, which kept him busy for about 15 minutes at a time, but Jack prefers live entertainment, so we had a stash of toys, books, and snacks to fill the eight hours to Northern Ohio.
Once there, Jack had a great time though.  Jack was spoiled by all of his grandparents as you'll see in the pictures.  He also met up with the same Santa from last year.  They must have made a good connection since Jack got everything he wanted and more this year.
Enjoy these pics from Christmas, Part I in Vermilion and Lorain.  We accidentally used Nonnie and Grandpa's camera when taking pics for Christmas, Part II in Dayton, which we haven't retrieved yet, but look for those down the road (maybe summertime?)
Posted by mjb at 8:16 PM No comments:

Since we joined Facebook, we've been too busy trying to make new "friends" to update our blog.  Jack hasn't figured out how to join yet (it's only a matter of months, I'm sure), so he's asked that we get back to the blog.
We had a rough start to the year with several bouts of cold, flu, and an ear infection, but Jack is a healthy, happy, and growing boy now. He kicked off the year by surprising us with the alphabet.  He started calling out letters while playing with magnets on the fridge one day and hasn't stopped since.  He can recite the alphabet now, but often skips "N." He can also count to 12, but doesn't know 11. He started with letters and numbers and has moved on to words and animal noises.  It's been lots of fun to watch him grow up.
Enjoy these pics from Thanksgiving with Nonnie and Grandpa. Jack had a great time with cousins Ethan and Michael.  He didn't try any turkey, but he had fun watching his Dad and friends playing the annual "Turkey Bowl" in the backyard.  No one was (seriously) hurt. 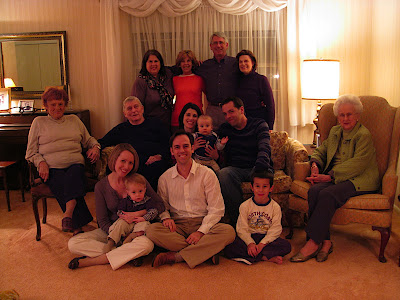