Back in Dayton, Ohio

We need to catch up on posts, especially with news on how Jack is developing. Jen is keeping a mental list of the "words" that Jack is babbling, so we'll get into that soon. He's also cruising around while holding onto things, although he's not quite ready to walk on his own.

After our vacation at the beginning of July, the rest of the month got pretty wild. Jen traveled to the west coast for a conference-- 4 nights! It was her longest trip away from Jack. So father-and-son decided to snap up an e-fare to Ohio and spend a few days with Nonnie and Grandpa. 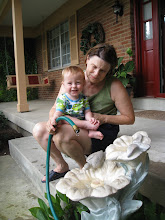 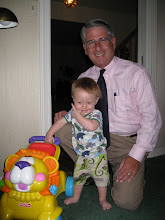 We arrived on Saturday and were joined by Karin, Dave, Ethan and Michael. Young Michael is getting so big! And Ethan is a model big-brother. He was terrific playing with Jack, and I know he's going to do enjoy when Michael gets mobile. 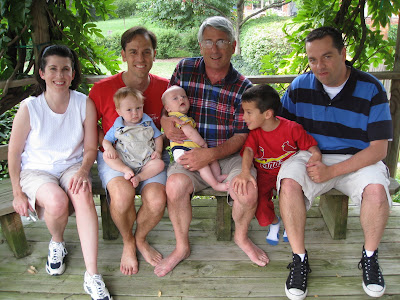 Jen being away for four nights was tough, but it helped being with family. Jack enjoyed all the attention and Grandpa even bought the walking lion he has at home. Jack did more laps around that house than we could count, and he was so proud of his new skill.

After three nights in Dayton, we headed back home. It was Tuesday, and Jen wasn't returning until Wednesday evening. We walked into the house, and Jack's head spun around on a swivel. Now back on his home turf, I could tell he expected to see mommy. So sad! He survived another night with just-dad. On Wednesday, Jen's return from the west coast was nearly washed out by thunderstorms. After 16 hours of travel and delays, she made it back, but Jack was already asleep. He woke up Thursday morning and firmly latched onto his mother for the rest of the day.

We'll put more pictures up from the rest of July in the next post. In the meantime, enjoy these shots from Dayton.

Jen's mom, Debbie, and husband, Steve, celebrated their 10-year anniversary on the 4th of July. The kids and grandkids gathered in the White Mountains of New Hampshire for an old-time family vacation. 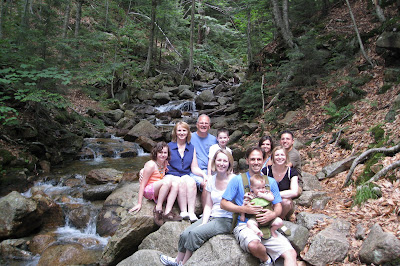 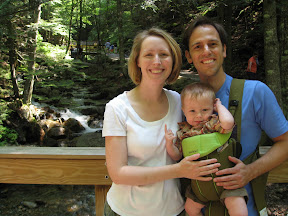 Lincoln and the surrounding mountains offered a lot of great distractions. Our first venture into the wilds was a walk through Franconia Notch State Park. We had a long hike up to see the flume gorge and Jack was on Cloud Nine for the whole walk. Be sure to check out the album for a slideshow of some great photos and check out the short videos below from the park. Unfortunately, the camera battery died toward the end of the week, so I missed a couple of really fun photo opportunities.

The real adventure for us wasn't the flight to Boston or drive to Lincoln-- it was sleeping in the same room with Jack for a week. He's been a reliable sleeper in his room for a while, and we were pretty nervous about having him in a pack-n-play crib, possibly awakening when we came to bed at night. Turns out, the boy is very adaptable (although he was an early riser-- a problem that we probably contributed to when he heard us stirring in the morning.) All in all, great job by young Jack!
We had a few misadventures (including some nasty insect bites), but Jack loved the constant activity and wasn't hurting for attention from his doting grandmother.  He got in his first full-size swimming pool and splashed around with the big kids, he rode two trains and even got on a boat to tour beautiful Lake Winnipesaukee. 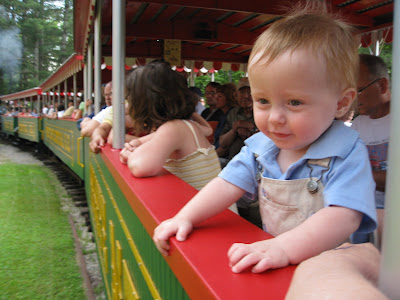 Like all vacations, this one came to an end and we all returned home with a lot of fun memories. Someday, we'll remind Jack about the bears he met in the mountains of New Hampshire!
Posted by mjb at 10:14 PM No comments: